How can I prevent catalytic converter theft?

Vehicles that are higher off the ground (like trucks and commercial fleet vehicles) are common targets as it’s easier for thieves to remove the converter. But this doesn’t mean other types of vehicles are immune. A CBC news story recounts details of thefts reported from “vehicles parked overnight at mechanic shops, sometimes at private residences and also at vehicle dealerships.” This outlines how catalytic converter theft is a concern both personally and commercially.

But these same news stories don’t have much advice for prevention. Some recommend parking vehicles in well-lit areas or enclosed garages, or even welding your converter to your vehicle to prevent theft. At Loss Prevention Fasteners, security is our specialty. For catalytic converter security, we recommend our Ultra 5 lobe and our Roby-pin security bolts for an easy-to-use, reliable security option. 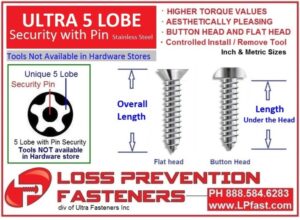 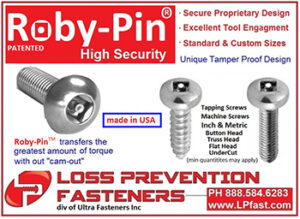 The Ultra 5 lobe bolt is a unique security pin that’s available with either a flat or button head. It’s used in many security applications, but can also be a great fit for your converter security. Ultra 5 lobe security screws are consistently rated as one of the most secure tamper-proof screws. They’re easy to install and can only be removed with a specialized tool that’s not available in hardware stores. This special tool is easy to use with any 1/4” screwdriver. These secure designs cannot be opened with standard screwdrivers and easily deter theft.

Make sure you’re not a footnote in the next story of catalytic converter theft with Loss Prevention Fasteners security pins. Avoid costly replacement and insurance coverage, and ensure peace of mind for your personal vehicle or your commercial fleet, with Ultra 5 lobe security pins.